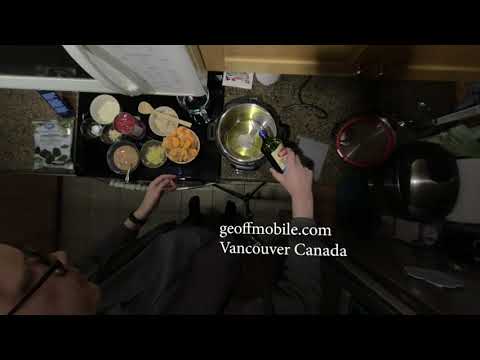 In this video, Geoff from geoffmobile.com shows how to make an African-Influenced Peanut Stew (Vegan) in the Instant Pot pressure cooker. This was recorded in 3D 180 VR using the Vuze XR – a 180 3D VR camera.

Cookbook Author Megan Gilmore writes:
“Loaded with nutrients, African peanut stew has a unique flavor that my family finds addictive. The combination of ginger and peanut butter reminds me of a slightly spicy Thai peanut sauce, with an earthy sweetness from the sweet potato. I use red quinoa in this stew because it retains its texture better than other varieties, but any color will do for the added plant-based protein.”

1 tablespoon extra-virgin olive oil
1 yellow onion, chopped
2 cloves garlic, minced (can use 3 cloves if a larger portion is desired)
2 tablespoons minced fresh ginger (2-inch knob) or 1 tsp dried powdered ginger
2 sweet potatoes, peeled and cut into 1-inch chunks – use larger chunks if desired (can use 3 sweet potatoes if a larger portion is desired)
One 15-ounce can diced tomatoes or a large can of tomato sauce
½ cup all-natural peanut butter
2 teaspoons fine sea salt (optional – can use a smaller amount such as 1/8 tsp or omit entirely if desired)
½ teaspoon red pepper flakes (optional, only use if you want a spicy dish)
1/2 cup uncooked quinoa, rinsed (or could use up to 1 cup uncooked quinoa if a larger portion is desired)
3 to 4 cups water
2 cups finely chopped kale, stems removed, or 2 cups frozen chopped kale (or spinach)

Press Sauté on medium/normal and add the olive oil to the Instant Pot. Once the oil is hot but not smoking, add the onion and sauté until softened, stirring frequently, about 2 minutes. Press Cancel and stir in the garlic and ginger while the pot is still hot.

Add 3 cups of the water, the sweet potato, tomatoes with their juices/tomato sauce, peanut butter, salt (optional), red pepper flakes (optional), and quinoa on top, all without stirring. (The peanut butter will blend in as the soup cooks.) Secure the lid and move the steam release valve to Sealing. Select Manual/Pressure Cook to cook on high pressure for 7 minutes.

When the cooking cycle is complete, let the pressure naturally release for 10 minutes, then move the steam release valve to Venting to release any remaining pressure. When the floating valve drops, remove the lid. Stir in the kale, which should wilt quickly.

For a thicker stew, press some of the cooked sweet potatoes against the side of the pot and stir them in until you have a creamier texture. If you like a thinner soup, add up to 1 cup of the remaining water. Taste and adjust the seasoning as needed, and serve warm. Store leftovers in an airtight container in the fridge for 1 week

Shout out to Chef Victor Bongo who makes a very famous African Peanut Soup (also very good – the recipe is available in his cookbook):
www.facebook.com/profile.php?id=100050287938039

For filming cooking videos I highly recommend using manual exposure on the Vuze XR (as the auto exposure often seems to overexpose the ingredients in the Instant Pot in cooking videos).