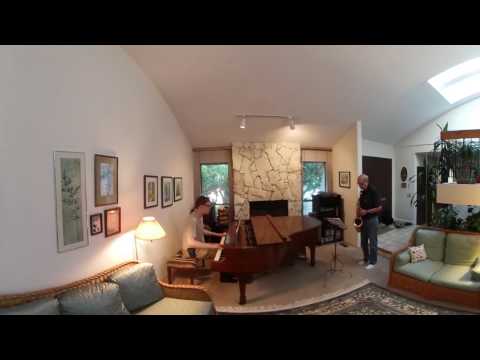 Blues for Alice is a jazz song written by the late great Charlie Parker.

Geoff from geoffmobile.com shows a recording of himself on piano and his dad on tenor sax, playing a jazz song. Geoff filmed a 360 video with his Samsung Gear 360 video camera in Vancouver, BC, Canada. The sound is captured in Ambisonic surround using Zoom H2n and Ambisonics is best experienced with headphones. When you rotate the video, the sound mix will change to your orientation.

Best viewed using headphones, and the Zeiss VR One Plus www.zeiss.com/virtual-reality/ or the Samsung Gear VR
Also compatible with Google Cardboard

Looks good viewed with Zeiss VR One Plus:
www.zeiss.com/virtual-reality/