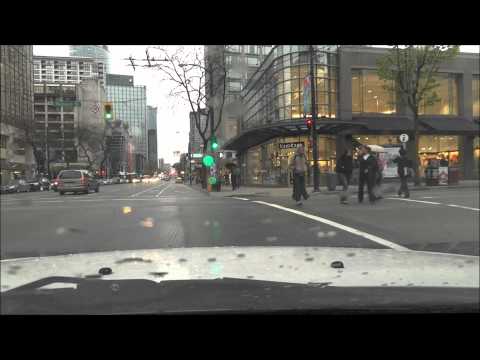 Here’s a driving tour of Burnaby and Vancouver BC Canada, sped up 8x and accompanied by the amazing music of Canadian musical artist, Colin Pombo.

Recorded at 8pm on May 10th 2011. I start at Kensington Shopping Plaza in Burnaby (on East Hastings Street), and drive West along Hastings all the way into Vancouver, through the Downtown Eastside and into the business district. I then turn left onto Burrard Street and drive south to Robson (famous shopping street) and then go along Robson all the way to Vancouver’s west end, where I explore Denman Street down to Davie, and then back past Burrard again down to Granville.

The music is Perceptions and Sea of Tranquility by Colin Pombo. Thank you so much Colin and friends for the amazing music, I am so glad to feature it here. You guys rock!!

I placed my Sony Cybershot DSC-HX7V on my dash using a mini-tripod which I got from London Drugs. I then recorded the drive in 17 megabits per second 1080i (60i) using manual white balance that I calibrated to a 18% Grey Card. I then imported the video into Windows Live Movie Maker, sped up the clips 8x and then added Colin’s great music. I really like my Sony HX7V, which is the latest camera from Sony that just came out last month. It is currently $349 at London Drugs, a little point and shoot camera. As you can see the quality is really great – so much improved over last years models.

I’m Geoff Peters, a 29 year old software developer, jazz pianist, and videographer from Vancouver BC Canada. My video blog is called Geoffmobile and is at www.geoffmobile.com