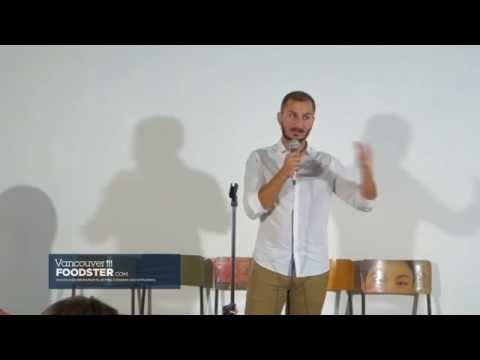 Food Talks Vancouver Volume 11
Theme: Innovation in our Food Community
1) Innovating when they started their business
2) How have they achieved their goals
3) Is failing a concern to being innovative

“Yashar had a whirlwind 2013 when he founded Yummus Organics and became a Director @thisopenspace (formerly Chinatown Experiment) in a short span of two months. He used thisopenspace as a marketing tool for Yummus, opening ShwayShway Café, a pop-up inspired by the Middle Eastern eatery where he tried hummus for the very first time only four years ago. He comes from a diverse background, holding a BSc in Biochemistry and a BBA in Marketing from Simon Fraser University. Yashar left his career in corporate telecomm sales less than a year ago to pursue his entrepreneurial spirit. He is inspired by the absolutely transparency of companies such as the Unreasonable Institute’s Failuresand Mixed Made’s Startup Journey. His goal in impacting local food culture is to embrace the same micro transparency at Yummus Organics and inspire local food entrepreneurs to do the same.”

Food Talks Volume 11 was held in Vancouver BC Canada on September 16th, 2014.