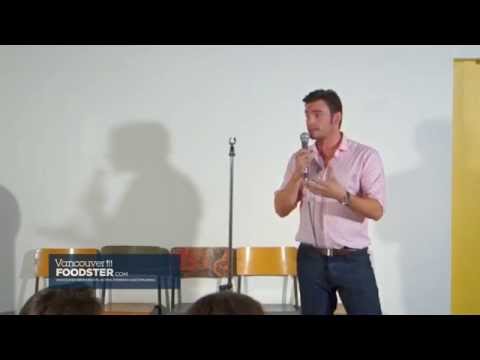 Food Talks Vancouver Volume 11
Theme: Innovation in our Food Community
1) Innovating when they started their business
2) How have they achieved their goals
3) Is failing a concern to being innovative

Steven Hodge grew up in Dundarave. After graduating from West Vancouver secondary high school, Steven spread his wings and moved to California to attend Whittier college, graduating with a bachelor of arts degree in business administration in 2000. Realizing his undeniable passion for cooking, he went on to complete the le cordon blue program at the California school of culinary arts in Pasadena in 2002. Specializing in none other, than pastry and chocolate.

After spending eight years in California, completing his apprenticeship at Dominic’s Restaurant in West Hollywood, Spago Catering, and Porto’s Bakery. Steven moved back home to Vancouver in 2004, where he assumed the executive pastry chef position at coast restaurant, part of the global group. Constantly striving to better his craft, Steven then decided to apprentice with the sugar art team of Patrice Cordier and Dominique Jerry in 2005. Soon after, with a taste for adventure, Steven and his wife Lara moved to London England where he spent three years working in some of the world’s most renowned restaurants; Le Caprice Restaurant, Gordon Ramsay’s 3 Michelin star restaurant, Royal Hospital Road, and the famous, Wolseley Restaurant.

In 2008, Steven and Lara returned home to Vancouver, where Steven was given the opportunity to work alongside renowned pastry chef Thomas Haas. He spent four and half years fine tuning and perfecting his skills under the guidance of Thomas.

In 2014, Steven opened Temper Pastry in Dundarave. Using only the highest quality of ingredients, temper offers the richest, handcrafted chocolates, flakiest pastries and melt-in-your-mouth desserts, as well as a selection of gourmet sandwiches, quiches, and roasted Stumptown coffee.

Food Talks Volume 11 was held in Vancouver BC Canada on September 16th, 2014.