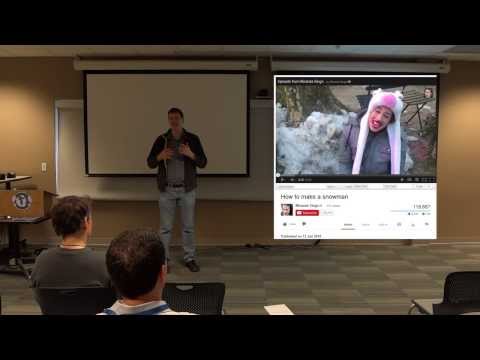 Geoff from geoffmobile.com gives a speech where he argues that Comments on Youtube are very important and valuable.

Filmed at Best Run Toastmasters Club in Vancouver BC Canada on January 16th 2014.
This is Geoff’s Speech #4 from the Toastmasters Advanced Public Relations manual – “Speaking Under Fire”.

Youtube comments are frequently mentioned as a source of hatred, trolling, and poor grammar. Basically, the ugly side of the internet. Today I am going to argue that comments on Youtube are important because they provide vital feedback to artists, allow people to share their frank and truthful opinions, and are a place for people to have meaningful interaction and discussion.

First, Youtube comments provide vital feedback to artists. As a creator, the most important thing to know as a creator or artist is that people are interacting with and experiencing your work. Miranda Sings is an online comedy character created by singer and performer Colleen Ballinger. ( www.youtube.com/user/mirandasings08 ) Her videos get hundreds of thousands of views, and hundreds of comments. Unlike Broadway stars and traditional movie stars, Miranda regularly responds to comments from her viewers, and a great attraction of her videos is seeing the reaction and feedback from the people who come across her videos. Many people are unsure whether Miranda is acting or being herself, and Miranda regularly calls out one supportive “Fan” comment and one negative “hater” comment at the end of each of her videos, usually both with bad grammar.

Second, Youtube comments allow people to share their frank and truthful opinions. Often in today’s world, the kind of feedback you will hear from people is not always truthful, because it is easier to give positive feedback and save face rather than be openly critical or negative, even if that is truthful. How many times have you been at a restaurant, and didn’t like the food, but when the server came by and asked you how it is, you just said everything is fine. I would do this just to avoid causing a disruption and making a scene. But online, being mostly anonymous means you can be truthful even if it means being negative.

Finally, Youtube comments provide a way for people to converse, interact, and discuss about the topics of their interest, whether it is their views on a pop star’s music, or helping each other with technical questions. My video about how to master audio recordings using free software ( www.youtube.com/watch?v=lcEQJBO1Kj0 ) has generated many comments where people ask me questions about their issues and I respond with additional information. This provides me with a way to continue the discussion and help more people achieve their goals in learning these technical subjects.

In summary, even though comments may be a source of hatred, trolling, and poor grammar, there are many benefits to having comments on Youtube. These include providing feedback to artists, allowing people to be truthful even if it is negative, and providing a place for people to interact and have beneficial discussions.