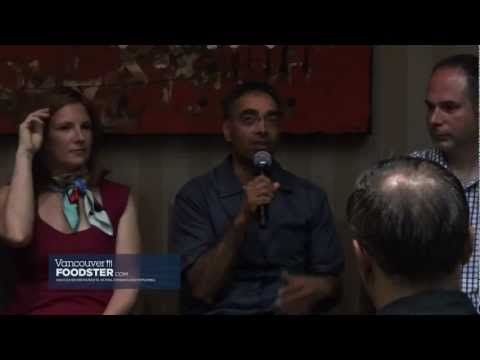 The closing Interactive Q&A Session from an evening of expert speakers from the Vancouver Food community.

1) Eric Pateman is the President and Founder of Edible Canada. Beginning as Edible Vancouver in 2005, Eric widened his scope with a culinary artisan retail store and expansion to Edible British Columbia. In 2011 he opened a full service restaurant, market kitchen and retail store across from the Public Market on Granville Island.

2) Zach Berman & Ryan Slater co-founded The Juice Truck in 2011. The two childhood friends had tossed around ideas of going into business together for years, after a trek through the Himalayas the juice truck was born. Zach and Ryan noticed the locals were always drinking a vibrant, sweet smelling, orange drink. This orange drink was made from Sea buck thorn berries and supplied these high altitude locals with most of their nutrients. This juice, sparked an idea. In August 2012 they launched their newest business venture Juice Cleanse.

3) Preet Marwaha is the CEO and Founder of Organic Lives, he started Organic Lives as a means to facilitate change. He currently owns and operates a restaurant along with a food and beverage line of products. Most recently he opened a Take-Away Café in the Chopra Yoga Center downtown Vancouver. He also spends his time as a personal health coach, teaching at the Organic Lives Education Centre and performing public health talks for schools and corporations.

4) Mary Mackay is the Head Baker and co-owner of Terra Breads, a bakery-café specializing in crusty breads and baked goods. In addition to their own 4 bakery cafes located throughout Vancouver they also sell their bread and rolls to a growing number of restaurants and hotels in the area.

5) Lee & Patrick Murphy co-own Vista D’oro Farms & Winery that started in 2001 on a 10 acre farm located in Langley. They grow orchard fruits, apples, pears, plums and cherries, as well as green walnuts and all are used in their preserves and baking for the farmgate shop. The winery’s flagship is their D’oro — a fortified walnut wine, they are also producing a growing selection of other wines.