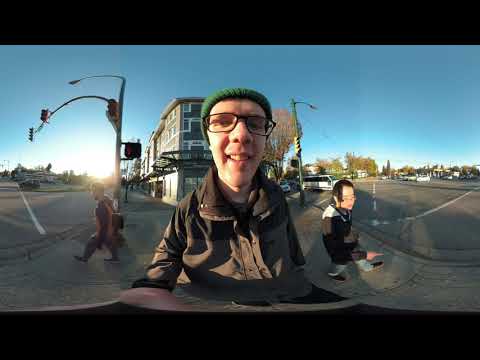 Using a stabilizer and 360 camera, I walk with a friend around Oak Street and King Edward Mall in Vancouver, Canada and point out some cool buildings and shops.

This is a 360 Video! Move your phone/tablet to explore or drag the screen on a web browser :)
This was shot on a YI 360 VR Camera, check them out at www.yitechnology.com/yi-360-vr-camera

Geoff from geoffmobile.com shares a walking video around the Oak and King Edward neighborhood of Vancouver, BC, Canada.

Shown in the video:
– Starts at Pallet Coffee at West 22nd and King Edward
– We walk across the street to the west side of Oak Street and walk past the under construction Chateau Laurier
– We walk past the Royal Bank and Easter Seals house, and cross the street over to the Safeway at the King Edward Mall
– We have a look at the Orange Halloween Pumpkins outside the Safeway.
– We pause outside the Dollar Store which has signs about shoplifting
– I continue on and walk to the end of the mall, past the sushi restaurant, hair salon, all the way to the insurance agency at the end.

Geoff filmed this 360 video, a short video blog, in 360 degrees, using his YI 360 VR Camera in Vancouver, BC, Canada, using a Stayblcam stabilizer.

Filmed with YI 360 VR Camera in 4K resolution with in-camera stitching. I used the YI 360 camera handheld on the Stayblcam stabilizer and filmed the vlog.