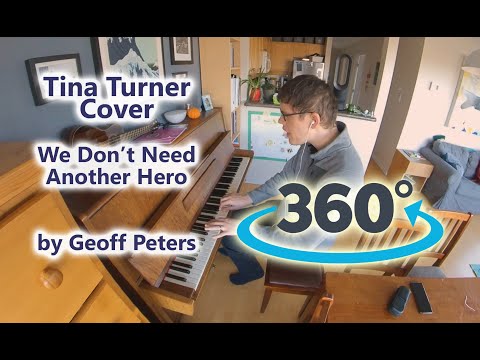 This is a 360 Video! Move your phone/tablet to explore or drag the screen on a web browser :)

Using a 360 camera, I give a live performance of Tina Turner’s song “We Don’t Need Another Hero” (in the same key as performed by Seal in his 2016 cover). This 360 video is filmed using the Insta360 One X 360 camera on a light stand mount.

For a *free* MP3 download of this song, please visit:
www.gpeters.com/tracks/youtube29

In March 2016, Seal and Jencarlos Canela performed a cover of the song during the Fox television special The Passion. It was sung in the story where Pontius Pilate (Seal) is torn at sentencing Jesus (Jencarlos) to death; the lyrics were amended to remove the reference to Thunderdome, which was replaced with “the love we know”

Geoff from geoffmobile.com filmed this 360 video, a 360 degrees live musical performance video, of himself singing and playing the piano, using his Insta 360 One X Camera in Vancouver, BC, Canada, using the camera on a light stand mount.

The audio is recorded in Mono on a Sennheiser ME-2 Lav mic into a Zoom H1 recorder in 48kHz 24bit and “mastered” in Audacity using High pass filter and George Yohng’s W1 Limiter.

Technical notes:
This 5.7k resolution video was captured using the Insta360 One X 360 camera. It was edited in Adobe Premiere Pro 2019. The audio was recorded on a Zoom H1 using a Sennheiser ME-2 lav condenser microphone.

Filmed with the Insta360 One X Camera
www.insta360.com/product/insta360-onex