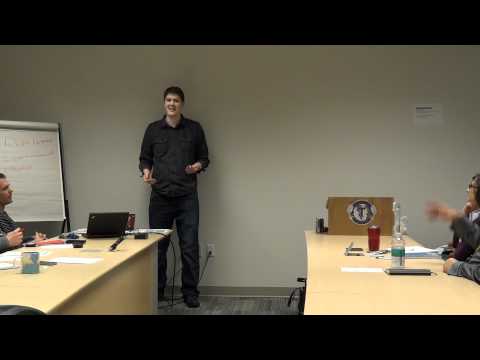 The Power of the Video Language
by Geoff Peters, Feb 9th 2012
geoffmobile.com

Presented to Best Run Toastmasters club in Vancouver BC Canada.

– The power of video to communicate ideas

Intro:
Youtube:· 8 years of content uploaded every day, Over 3 billion views of videos /day
But what’s significant about Online Video?
Why should you get involved and learn how to create it?

– Documentaries have power to change real world (Super Size Me).

– Example of my new website for instant mashups to idea to reality in 1 week, developed by someone I don’t know.

Combine sound and still or moving images, capture reality or show something abstract.

3. Scalable to time and place
– Anyone can watch a video, jump traditional hierarchies.

Godfrey’s video idea gets noticed by directors.
– Can reach a large audience, video player does the work for you (Youtube).
– People watching don’t have to be located in the same place or time as you.

Conclusion:
– Ability to create, communicate in video, and interpret the language of video

and scale across the globe or across an organization.
Technology for making video is getting cheaper – through TV and Youtube we already know the language, so let’s get comfortable speaking it!

Idea in your head to Words to Interpretation to Thoughts in another person’s mind.

Richness of mediums:
-In Person – one on one
-Phone (one on one, voice only, not rich, real time)
-Video (scalable)