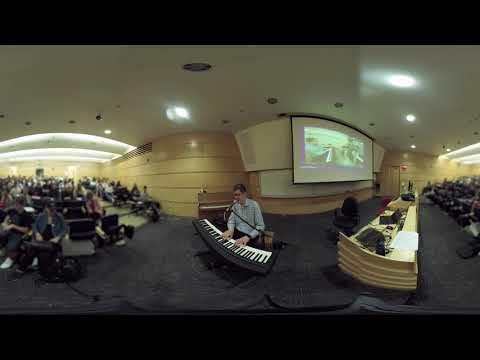 This is a 360 Video! Use headphones for Ambisonic 360 sound. Move your phone/tablet to explore or drag the screen on a web browser :)

Geoff from geoffmobile.com shares a musical performance video in Burnaby, BC, Canada, a suburb of Vancouver BC Canada, showing himself performing his original song “Just by my Coder” which is a geeky mashup of Daniel Caesar’s “Get You”.

The sound is captured in Ambisonic surround using Zoom H2n and Ambisonics is best experienced with headphones. When you rotate the video, the sound mix will change to your orientation.

Lyrics:
Just be my coder – to the tune of “Get You” by Daniel Caesar
Lyrics by Geoff Peters (2019)

I code JavaScript, on front end and back end
My ide has been around for me
Products have fallen, recruiters be calling
None of that could ever make me leave
Every time I look into your screen I see it
You’re all I need
Every time I geek a bit inside I feel it

Geoff filmed this 360 video, a 360 degrees music performance video, using his YI 360 VR Camera in Burnaby near Vancouver, BC, Canada, using a light stand as a tripod.